Early English translation of Mein Kampf, this is the “Cheap Edition” of My Struggle, published by The Paternoster Library.

Octavo, [xvi], [17]-285pp. Known as the “Cheap Edition, March 1936,” as stated on the copyright page. Green cloth, title stamped in white on spine and front cover. Rubbing to front cover and boards, some loss of white print. Generally clean text, with a few passages marked with pencil. Previous ownership inscription on front free endpaper. In publisher’s exceptionally scarce dust jacket, reinforced at hinges with tape repairs, chipping and some loss. (Pastore, 104b1). The first edition of this English translation of Mein Kampf, known as My Struggle to English readers, appeared in 1933 and was published by Hurst & Blackett. (Pastore, 101) It was an abridgment of the full German text.

I have never encountered a literary production so abominable. – Chaim Weizmann. This early translated copy of Mein Kampf was heavily criticized for its translation. The translator remained anonymous for his own protection and was criticized for leaving out large portions of Hitler’s anti-Semitic rants. Zionists believed it didn’t present an honest picture of the German dictator, while others criticized the work as meandering and unorganized. 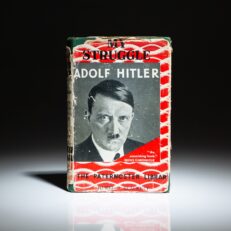