Nearer The Grass Roots – and by the same author, an account of a journey – Elizabethton

× Ask a Question re: Nearer The Grass Roots – and by the same author, an account of a journey – Elizabethton
SKU: 1303 Category: Literature

Signed limited edition of Nearer The Grass Roots by Sherwood Anderson, from the personal library of Frank Sinatra. Octavo, [37pp], [6 blank]. Green boards, black cloth spine with title printed on spine. Typography by the Grabhorn Press. Small residue stain on front cover. Lacking slipcase. From a limited edition of 500 copies, this being number 32, signed by the author on the half title. Includes the auction tags from the estate sale of Frank Sinatra.

Comments: Frank Sinatra (1915-1998) was an actor, singer, producer and political supporter. He is considered by many to be the “greatest singer of the 20th Century.” In 2018, Sotheby’s auctioned off part of the estate of Frank Sinatra’s wife, Barbara Sinatra. This collection included numerous pieces from their homes in Los Angeles, Malibu and Palm Springs. 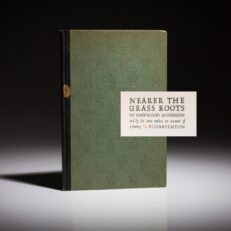 You're viewing: Nearer The Grass Roots – and by the same author, an account of a journey – Elizabethton $225.00
Add to cart