New Mexico. Otherwise, The Voiage of Anthony of Espeio

× Ask a Question re: New Mexico. Otherwise, The Voiage of Anthony of Espeio
SKU: 10374 Categories: American Indians, Travel and Exploration

Translated from Spanish, the first accounts of Espejo’s exploration of Texas, Arizona and New Mexico appeared in Madrid in 1586. Known as the Espejo-Beltran expedition, it consisted of fourteen Spanish soldiers and provisions for the rescue of two priests, Lopez and Rodriguez. The expedition resulted in the earliest European colonization effort of the New Mexico territory, exploration of the Pecos River, and encounters with the Jumano Indians near Pecos, Texas. Espejo became the first European to traverse the full length of the Pecos River. He died in 1585 in Havana. 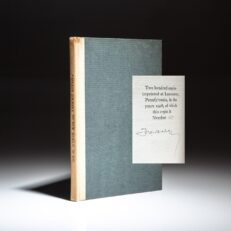 You're viewing: New Mexico. Otherwise, The Voiage of Anthony of Espeio $1,250.00
Add to cart