Inscribed note from Senator Chuck Hagel to Jack Valenti on senate stationary. Note reads: “Dear Jack – Thanks for your thoughtful note. These are historic times. Not unlike right after WWII, we have an opportunity to help re-shape the world – for the better! Take care of yourself. Look forward to seeing you soon. Your fan, Chuck.” Note is dated June 25th, 2003. 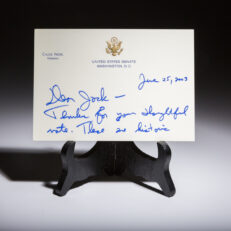 You're viewing: Note on Senate Stationary $90.00
Add to cart