First edition of On Our Way by Franklin D. Roosevelt, signed by 24 officials working for the Industrial Advisory Board of the National Recovery Administration (NRA).

Octavo, xiv, 300pp, [6]. Blue cloth, title in gilt on spine, facsimile signature of author in gilt on front cover. Copyright page dated 1934, with “1” next to publisher’s device. Red topstain. Contains first edition points including “party” instead of “property” on page x, line 13. Errata slip laid in with noted corrections. Sunning to spine, a few scuff marks on both covers. In publisher’s first state dust jacket, likely paired with this book, $2.50 on front flap, portrait of Roosevelt on back panel with no reviews, light toning to spine, bright illustrations on covers. (Halter T-585) This copy was a gift for Charles Lambert Heyniger, Secretary of the Industrial Advisory Board of the NRA and future Headmaster of The Darrow School in New Lebanon, NY. 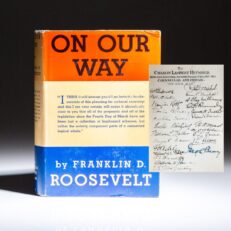