Signed first edition of One Man’s Window by RAF Flight Commander and Spitfire pilot, Denis Barnham. This book was reissued in 2011 with a new foreword by Barnham’s wife and titled Malta Spitfire Pilot: Ten Weeks of Terror, April-June 1942.

Octavo, 201pp, [7pp ads]. Black cloth, title stamped in gilt on spine. Stated “first published in 1956” on copyright page. Complete with frontispiece and 16 full-page black and white illustrations by the author. Previous ownership inscription on front free endpaper. In the publisher’s near fine dust jacket, retail price on front flap, chipping to top of spine, short closed tear to rear hinge, light soiling to back panel. This copy is signed by the author on the title page. A scarce first edition, with no other signed copies on record.

Denis Barnham (1920-1981) was an RAF pilot who flew Spitfires in the Battle of Malta during the summer of 1942. The defense of Malta against Axis airborne raids, known as Operation Bowery, was a desperate and ultimately successful operation for the RAF. With the loss of 47 Luftwaffe aircraft to 3 British planes, Axis forces ceased bombing raids against the small nation. Flight Lieutenant Barnham returned to England after the Malta campaign to train other RAF pilots. After the war, Barnham became the Art Master at Epsom College. 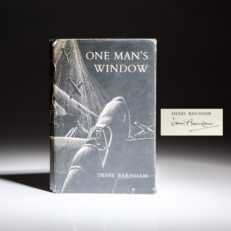