From the co-discoverers of the Upper Mississippi, Jacques Marquette and Louis Joliet, this work includes a very early map of the full Mississippi River. This map is believed to be based on the one Joliet drew from memory in 1674. Born in France, Jacques Marquette arrived in Quebec as a Jesuit missionary in 1666. In 1668, he traveled west and went as far as the south shore of Lake Superior. Due to the Indian Wars of 1671, he was forced to retreat to the Mackinac Straits, where he founded the mission of St. Ignace. In 1672, Marquette was ordered to accompany Louis Joliet in search of an overland route from the Great Lakes to the Mississippi River. Leaving in 1673, the two men mapped the course of the Mississippi River from Wisconsin to within 435 miles of the Gulf of Mexico. They returned through a site near present-day Chicago. After the expedition, Marquette stopped in Wisconsin, while Joliet returned to Quebec to report on their discoveries. 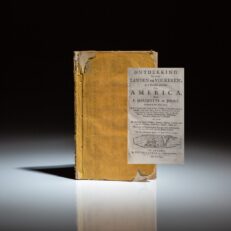