Outdoor Pastimes Of An American Hunter

First edition of Outdoor Pastimes of an American Hunter by President Theodore Roosevelt.

Comments: Theodore Roosevelt served as the 26th President of the United States. He was a prolific author, writing more than 18 books during his lifetime, beginning with “The Naval War of 1812” in 1882. His other notable works include The Winning of the West, African Game Trails, and The Rough Riders. This work, published during his presidency, contains articles originally written for the Boone and Crockett Club publication and “The Deer Family” by Caspar Whitney. (Wheelock, 10) 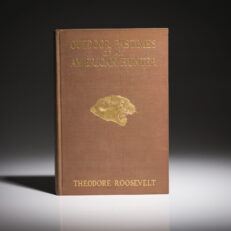 You're viewing: Outdoor Pastimes Of An American Hunter $475.00
Add to cart