Point of No Return

First printing of the Point of No Return by Paul Osborn, inscribed to Broadway company manager, Abe Cohen.

Octavo, 182pp. Light brown cloth, title in gilt on spine, photograph on cover. Stated “first printing” on copyright page. Light wear along bottom edge. Free of any marks except the inscription. In publisher’s dust jacket, $2.50 on front flap, some toning to spine, a clean and stable example. Inscribed by the author: “For – Abe Cohen – From New Haven – to Boston – to Philadelphia – to New York – drive-drive-drive. What were we doing? – Anyway – many thanks. Paul Osborn. April 14, 1952. New York, NY.”

Point of No Return was a Broadway production starring Henry Fonda and Frances Bavier. It was written by Paul Osborn and based on the novel by John P. Marquand. It opened in New Haven in 1951, then ran in Boston, Philadelphia, and finally New York at the Alvin Theater. 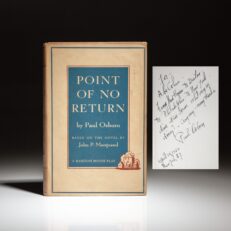