Framed print, with a cream cloth matte, gold decorative frame. Measures 27.5″ x 24″. Was not examined outside the frame. This portrait of Prime Minister Ben-Gurion was painted by American artist Herbert L. Davidson. It was painted at Ben-Gurion’s retirement home, Sde Boker, in the last year of his life. This color lithograph is limited to 500 copies, this being number 262, signed by the artist and Ben-Gurion in pencil. An attractive copy.

David Ben-Gurion (1886-1973) was the first Prime Minister of Israel. He was known as Israel’s Founding Father for the role he played in establishing the nation. 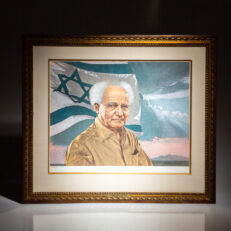