Black frame, white matte. Full piece measures 26″ x 22″, museum glass. Not examined outside frame. Signature of George Bush beginning to fade, otherwise fine. This was Ambassador Perkins first position after serving for three years as the United States Ambassador to South Africa. As Director General of the Foreign Service, he aimed to increase diversity in the ranks, which he felt was “an exclusive club: overwhelmingly white, male and Ivy League-educated.” 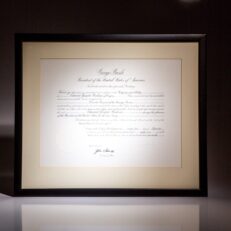 You're viewing: Presidential Appointment: Director General of the Foreign Service $850.00
Add to cart