Color photograph in white matte, measures 10″ x 12″, detached cover with the “Joint Chiefs of Staff” seal in gilt. This photograph appeared in Edward Perkins’ book, Mr. Ambassador: Warrior for Peace (2006), on page 484. Inscribed in black pen: “To Ed Perkins, With admiration and thanks for your example of selfless service. Best wishes, Colin L. Powell.” 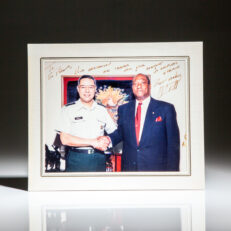