Appointment of Edward J. Perkins as the United States Ambassador to the Republic of Liberia, includes the White House letter detailing his mission objectives and his official appointment from President Ronald Reagan. Both items signed in autopen by President Reagan. 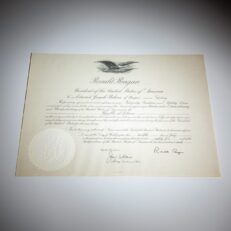 You're viewing: United States Ambassador to Liberia $575.00
Add to cart