Read My Lips: No New Taxes

Octavo, 159pp. Blue cloth, gilt titles on spine and front board, with gilt signature on front cover. Limited edition of 175 signed copies and 26 lettered copies, signed by former President George H.W. Bush. This is limited edition number 170 of 175, signed by President Bush on the half-title.

Comments: This book details the political courage necessary to go against party doctrine and compromise on a campaign promise, for the betterment of the nation. While raising taxes in the Budget Enforcement Act of 1990, it is largely credited with losing Mr. Bush the election in 1992, the tax cuts and fiscal package of 1990 were considered vital to the economic success of the 1990s. 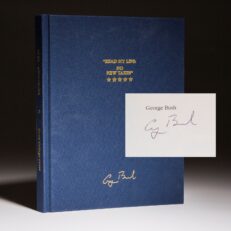