Report Of The Joint Committee On The Conduct Of The War

× Ask a Question re: Report Of The Joint Committee On The Conduct Of The War
SKU: 11714 Categories: Civil War, Vice Presidents

Presentation copy of Report of the Joint Committee on the Conduct of the War to Brevet Brigadier General William M. McArthur of the 8th Maine Volunteer Infantry Regiment, from Vice President Hannibal Hamlin. Complete in three volumes.

Brevet Brigadier General William M. McArthur (1832-1917) joined the 8th Maine Infantry in 1861 and was commissioned the rank of Captain. He notably served at the Battle of Drewry’s Bluff, the siege of Petersburg and the Appomattox Campaign. He was severely injured during the siege of Petersburg, but rejoined his regiment within a few months, even before his wounds were healed. Before his discharge in 1866, he was brevetted brigadier-general for “gallant and meritorious conduct at the battle of Drury’s [sic] Bluff.” Before the war, William McArthur had studied law at Bowdoin College, but upon his return to Maine in 1866, rather than practice law, he became postmaster of Limington. He was elected to the Maine House of Representatives and later the Maine Senate. He died after a long illness in 1917. His brother, Arthur McArthur, joined the Confederate Army and was killed in battle in 1862. The McArthur family was one of a handful of families to fight on both sides of the conflict. 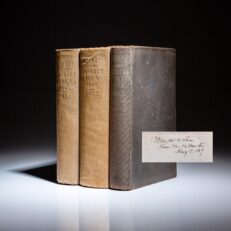 You're viewing: Report Of The Joint Committee On The Conduct Of The War $1,650.00
Add to cart