Robert Todd Lincoln (1843-1926), the son of President Abraham Lincoln and Mary Todd Lincoln, remained active in politics after the untimely death of his father. After the Civil War, he finished law school in Chicago and began a successful practice in the midwest. He served as Secretary of War during the Garfield and Arthur Administrations and United States Ambassador to the United Kingdom during the Harrison administration. He was mentioned various times as a potential Republican presidential or vice-presidential candidate, but declined every time. 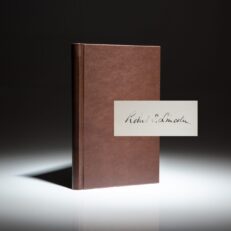