No Better Place To Die

Signed first edition of No Better Place To Die by Peter Cozzens.

Peter Cozzens is an award winning author of numerous books on the Civil War and the Indian Wars of the American West. He served as a Foreign Service Officer for the United States Department of State and was awarded the department’s William R. Rivkin award for service in 2002. He is the recipient of the 2017 Gilder Lehrman Military History Prize and the 2016 Caroline Bancroft Prize for history. Some of his works include: The Earth Is Weeping: The Epic Story of the Indian Wars for the American West (2016), This Terrible Sound: The Battle of Chickamauga (1992), and The Shipwreck of Their Hopes: The Battles for Chattanooga (1994). His next book will be Tecumseh and the Prophet: The Shawnee Brothers Who Defied A Nation, expected in 2020. 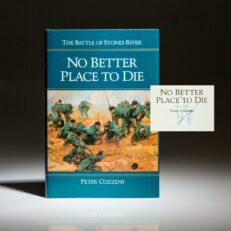