A copy of President Gerald R. Ford’s address to the Republican National Convention, August 20th, 1992, signed on the front cover.

The Republican Convention of 1992 marked the end of an era for many prominent politicians of the 20th century. It would be the last major political speech by former President Ronald Reagan and the last convention attended by President Richard Nixon. At the convention, President George H.W. Bush and Vice President Quayle accepted their party’s nomination for a second term, with President Gerald Ford offering a full endorsement in his speech. 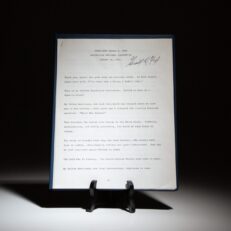