When General MacArthur was relieved from his command in 1951 by President Harry Truman, he returned to the United States as a hero. He addressed a joint session of Congress, where he famously said that “old soldiers never die; they just fade away.” But MacArthur had no intention of fading away. He was quickly mentioned as a candidate for the 1952 Republican presidential nomination, but on his speaking tour of the United States, it became apparent that MacArthur was more interested in settling scores with Truman than presenting a positive vision for the future. This book was an attempt to correct that public image, but by the time of its publication, it was too late. He endorsed Robert Taft for president in 1952. 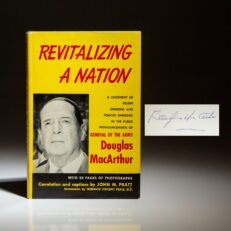 You're viewing: Revitalizing A Nation $975.00
Add to cart