Say…Didn’t You Used To Be George Murphy?

Paving the way for Ronald Reagan and Arnold Schwarzenegger, Senator George Murphy made the leap from show business to politics in 1964. He ran for the Senate seat held by former Kennedy press secretary Pierre Salinger, who had been appointed to serve the remainder of Clair Engle’s Senate term. He would serve in the Senate from 1965 to 1971. 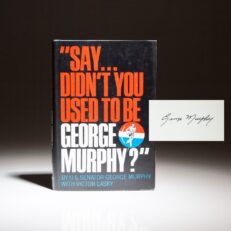