Limited edition of Salmagundi by William Faulkner, with a poem by Ernest Hemingway titled “Ultimately.”

Octavo, 53pp, [1]. Original printed wrappers, title in red on spine and front cover. Solid text block, a touch of wear to corners, sunning to spine. A near fine example. Housed in a red paper-covered slipcase, good condition with some wear and toning. From a limited edition of 525 numbered copies, this being number 45. 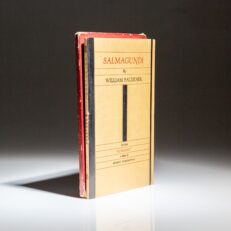