Sections of a Slave Ship

A framed cross-sectional illustration of a slave ship, based on the British slave ship Brookes, showing placement of slaves in the various parts of the ship.

This illustration appeared in The History of the Rise, Progress and Accomplishment of the Abolition of the African Slave-Trade by the British Parliament, by Thomas Clarkson. The first edition was published in London in 1808. This fold-out illustration is from the first American edition, published in Philadelphia in 1808. (Sabin 13486) The illustration is framed with dark brown wood, dark gray matte, and covered by museum glass. An exceptional piece, with provocative and historically important imagery.

The British slave ship, Brookes, first sailed from Liverpool in 1781. The Plymouth chapter of the Society for Effecting the Abolition of the Slave Trade published a depiction of her conditions in 1788, detailing how slaves were transported across the Atlantic. Regulations mandated that no more than 454 were allowed on the ship, based on her stowing capacity, but sailors noted that often 600+ were transported. The illustration was critical to the eventual abolition of the African slave trade by Great Britain in 1807. As the image was seen around the world, it continued to inspire the abolitionist movement and change public opinions. 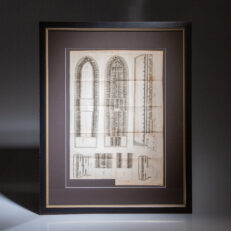