Black and white photograph. Measures 10″ x 8″. Bumped edge along top. Description of photograph written in blue pen on verso. Signed by United States Ambassador to the United Nations and future President George H.W. Bush, with a unique inscription as ambassador.

After four years in the House of Representatives, George H.W. Bush resigned his position to run for the open Senate seat in Texas. He lost the election, but in the process, he ingratiated himself with the Nixon Administration. Originally considered a senior adviser to Nixon, Bush requested the post of United States Ambassador to the United Nations, his first post dealing with foreign policy and an important career decision for the future President of the United States. 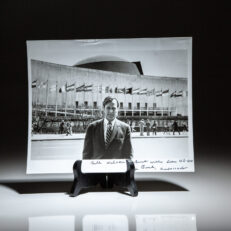