Framed color photograph with museum glass, full piece measures 18″ x 23.” Dark cherry wood with silver trim. This piece is signed on the gray matte, below the photograph. Provenance: A gift from a flag officer to an employee at the Pentagon Office Building in Crystal City, VA, which closed during the 2011 Base Realignment and Closure. Inscription reads: “First US Space Flight – 5/5/61 – To The Crew Of Lake Champlain (CG 57) – Just One Of The Many ‘Firsts’ For A Great Name – Alan Shepard / Rear Admiral, USN (ret).” An exceptional association piece.

On May 5, 1961, American astronaut Alan Shepard (1923-1998) became the first American to travel into space aboard the Freedom 7. His suborbital flight lasted only 15-minutes. His spacecraft was recovered by the USS Lake Champlain (CV-39). Upon his successful completion of the flight, Shepard was awarded the NASA Distinguished Service Medal from President John F. Kennedy and the Distinguished Flying Cross. Shepard returned to space in 1971 aboard Apollo 14, becoming the 5th person to walk on the moon and oldest person to date. The USS Lake Champlain (CG-57) was commissioned in 1988 and remains in active service today. 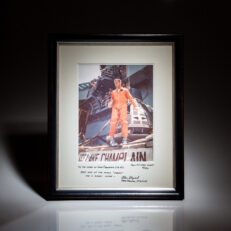