Signed Photograph: Departing on Marine One

Signed photograph of President Jimmy Carter boarding Marine One on January 16th, 1981, his last trip to Camp David before the inauguration of Ronald Reagan.

Photograph by Warren K. Leffler. Photograph in black and white with no border, measures 11″ x 14″. Kodak printing on verso. Signed in black pen, with a full Jimmy Carter signature. A fine example.

President Carter visited Camp David nearly a hundred times during his presidency. This photograph was taken on Friday, January 16, 1981, as he was departing on his last visit there as president. While at Camp David, he continued to negotiate for the release of the Iranian hostages, which he discusses in his autobiography, Keeping Faith, published in 1982. He returned to the White House on Sunday, January 18th. 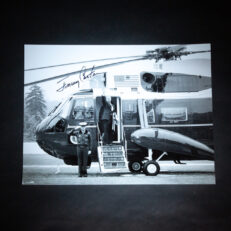 You're viewing: Signed Photograph: Departing on Marine One $225.00
Add to cart