Framed photograph, measures 21″ x 17″, white decorative matte, gold-trimmed frame. Labels on verso from the Hoover Institution of Stanford University. Not examined outside of the frame. Signed in gold pen, with an inscription that reads: “For Rupert Murdoch, with my respect and admiration. George P. Shultz.” An exceptional association between two conservative icons of the 20th and 21st centuries.

George P. Shultz enjoyed a long career in the public and private sector. He served as Secretary of Labor then Secretary of the Treasury for President Richard Nixon, and later served as Secretary of State for President Ronald Reagan. In the private sector, he was the president of Bechtel Group. He and the recipient of this signed photograph, media mogul Rupert Murdoch, are both members of the Hoover Institution at Stanford University. They were also board members and investors in Theranos Corporation, which collapsed in disgrace in 2018 due to massive fraud. 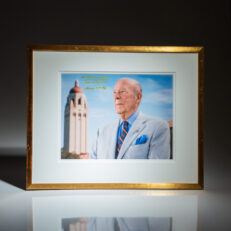