Signed photograph of the Hiroshima Nuclear Detonation, August 6, 1945, signed by the pilot of the Enola Gay, Paul Tibbets, and the navigator, Dutch Van Kirk.

Brigadier General Paul Tibbets (1915-2007) was the pilot of the B-29 Superfortress, known as the Enola Gay, which dropped the atomic bomb on the Japanese city of Hiroshima. He was accompanied by Theodore “Dutch” Van Kirk (1921-2014), the navigator of the Enola Gay and last surviving member of the crew. 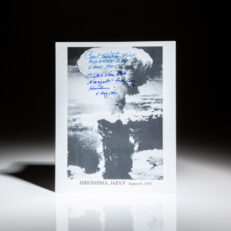