This photograph of President Jimmy Carter and Senator Joe Biden was taken on October 19th, 1979. Senator Biden was visiting President Carter to discuss the SALT II treaty, which had been signed by Carter and Brezhnev in Vienna the previous June. The treaty was met with unrelenting criticism in the United States, with many saying it was a sellout to the Soviets. With the Soviet invasion of Afghanistan in December 1979, all hopes of ratifying the treaty in the Senate were lost. Carter withdrew the treaty in 1980. 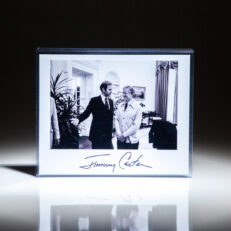