Taken by a White House Photographer, but is not dated. Photograph measures 8″ x 10″, in black and white. Signed on the white border: “Best regards – John Glenn.” Full signature of Jimmy Carter. 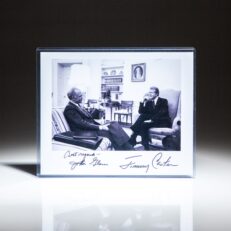