Signed photograph of President Jimmy Carter, standing next to King Hussein of Jordan, the Last Shah of Iran, Mohammed Reza Pahlavi, and his wife, Farah Pahlavi.

This photograph was taken on December 31st, 1977, in Tehran. Measures 8″ x 10″. Color photograph, with White House stamp on verso with code C3788-10. In fine condition. This photograph is signed by President Jimmy Carter and King Hussein of Jordan.

This New Year’s Eve trip by President Carter to Tehran was intended to reinforce the cordial relations between the United States and Iran. During a celebratory toast, President Carter praised Iran as the “island of stability” in the Middle East. The next two years would see the Iranian Revolution, the fall of the Iranian monarchy, and the eventual hostage crisis. 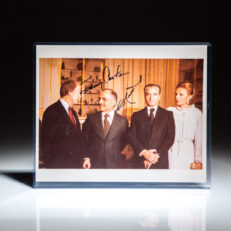