When this photograph was taken, President George H.W. Bush was visiting Oak Ridge National Laboratory in Oak Ridge, Tennessee. Frank Barnett (1933-2016) was serving as the Executive Director of the Bush-Quayle Tennessee presidential campaign at the time of this photograph. Frank Barnett had previously served as the Governor of American Samoa during the Gerald R. Ford administration. 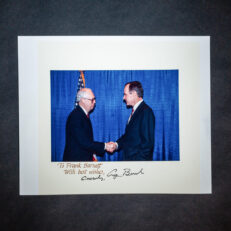