The Need Of Change

Inscribed to Congressman Nicholas Longworth and his wife, Alice Roosevelt Longworth, New Edition of The Need of Change by Julian Street.

The author of this book, Julian Leonard Street (1878-1947), was an American writer and reporter for the New York Mail and Express. The recipient, Speaker of the House Nicholas Longworth (1869-1931), served in the U.S. House of Representatives from 1903-1913 and 1915-1931. The inscription to “Senator Longworth” may have been an error, since Longworth was a congressman at the time of this dedication. Nicholas Longworth married Alice Lee Roosevelt, the daughter of Theodore Roosevelt, in 1906. He died unexpectedly in 1931, while serving as Speaker of the House. 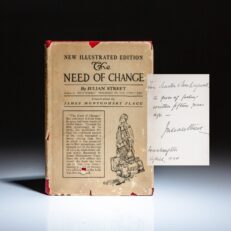