Letters from a B-29 Bombardier in the Pacific Theater

× Ask a Question re: Letters from a B-29 Bombardier in the Pacific Theater
SKU: 11456 Categories: New Inventory, World War II

A collection of 17 letters from Lt. Ralph R. Hayes to his brother, Major John E. Hayes.

This collection details the daily life of Lt. Hayes, a member of the 20th Air Force, Army Air Corps, 504th Bombardment Group in the 421st Bombardment Squadron. His crew flew 35 missions in Japanese territories, including the firebombing of Tokyo. Other bombing missions included the destruction of kamikaze airfields in Kyushu and bombing raids over Iwo Jima. This collection of letters details his time at the Army Flying School in Midland, Texas and his service at Carlsbad Air Force Base in New Mexico. He includes descriptions of meeting General Hap Arnold and Admiral William Halsey while in the Pacific. A unique collection of letters between brothers. 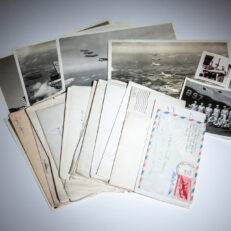 You're viewing: Letters from a B-29 Bombardier in the Pacific Theater $650.00
Add to cart