America: Too Young to Die!

Comments: De Seversky was a Russian-American aviator, who advocated that air power during W.W.II was the key to strategic dominance over Germany and later Russia. He published his New York Times best selling book, Victory Through Air Power, in 1942. He followed Victory with Air Power: Key to Survival. 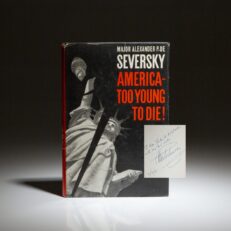