First edition of Six Crises by Richard Nixon, inscribed to a member of the Pitcairn family of Pittsburgh.

Garthowen Pitcairn (1924-1997) was the grandson of John Pitcairn, co-founder of PPG Industries of Pittsburgh, PA, and a member of one of the wealthiest families in America. Garthowen Pitcairn was the president of Pitcairn Motorcar Company, owning 17 car dealerships around the Greater Philadelphia area. He served in the U.S. Army Air Corps during WWII. Six Crises is the first book written by then former Vice President Richard Nixon. It outlines six major political issues during his career. It went a long way towards rehabilitating Nixon’s image after his presidential election defeat of 1960. 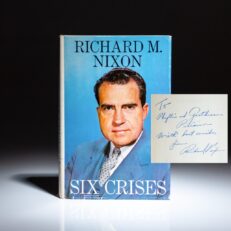