Octavo, [8], 515pp. Maroon cloth, title in gilt on spine, with author’s signature stamped in gilt on front board. Stated “first trade edition” on copyright page with number line 2-9. Minor foxing along top, solid text block, a near fine example. In publisher’s dust jacket, $12.95 retail price on front flap, a touch of creasing on front and back flaps, sunning on spine, a near fine jacket.

Winner of the 1980 National Book Award for Fiction, William Styron’s Sophie’s Choice has a controversial yet popular history. Its success as a novel gave way for the production of a film with the same name released in 1982, receiving multiple Academy Award nominations, with Meryl Streep winning Best Actress for her portrayal of Sophie. 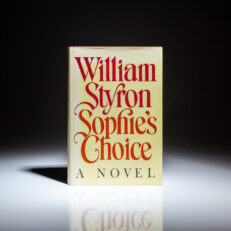