The Army Of The Future

First American edition of The Army Of The Future by General Charles de Gaulle. Originally published in France in 1934 by Lieutenant Colonel de Gaulle, under the title Vers l’Armee de Metier.

Octavo, 179pp. Blue cloth, title stamped on spine. First edition, with no other printings mentioned on the copyright page. Free of any marks or wear. In publisher’s dust jacket, $2.50 retail price on front flap, toning to spine,

In this famous work by de Gaulle, he calls for the creation of a “professional army” and a modern mechanized corps. He recognized the inherent weaknesses of defending the French countryside from a multilateral attack, with numerous ways that an adversary could take Paris. His ideas were met with skepticism from the French political class. He was proven correct in June, 1940, when Paris fell to Nazi Germany. 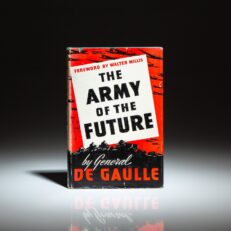