The case of Major-General Gouverneur K. Warren before a Court of Inquiry, regarding the battles of “Gravelly Run,” “Dinwiddie Court-House,” and “Five Forks,” signed by General Philip Sheridan.

Octavo, 126pp. Original paper wrappers. Stapled at spine. Includes two fold-out maps at rear, detailing the Battle of Five Forks. Both maps are in delicate condition, with one map laid-in. (Dornbusch 1871) (Eberstadt 115) Signed on the cover: “With compliments of Lieut. General Sheridan.”

After the Battle of Five Forks in April of 1865, Major General Warren was relieved of his command by Lt. General Sheridan, for a lack of effort in getting his troops ready for battle at Gravelly Run Church. Warren went directly to Sheridan to ask for reconsideration of his orders, but Sheridan refused. Many of Warren’s officers wrote defenses of his actions and believed that Sheridan was jealous of perceived successes of Warren. The court of inquiry found that Warren’s removal was unjustified, and many historians agree. 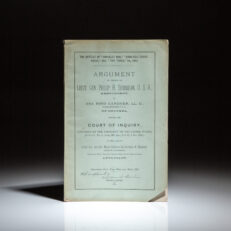