Letters to William Safire from Secretary of State Colin Powell

The first letter is a response from Powell to Safire regarding his use of the term “Warrior.” Powell includes an article he wrote in 1999, outlining his “desire to resurrect [the term] G.I.,” but he failed. The articles and references are included in this folio, with associated notes from Powell. The second letter, from the Office of the Secretary of State and dated January, 2005, references Powell’s appearance on Meet The Press. In a conversation with Tim Russert, Powell was defending the administration’s response to the 2004 Indian Ocean tsunami, when in response to criticism from a “former official,” he notes that there is always some “Rolodex Ranger” around to offer criticism. Later in the show, Safire was also appearing and referenced the “Rolodex Ranger” comment and says it’s a nice phrase. Powell has continued to use the phrase when confronted with criticism from “former officials.” Housed in custom blue cloth folio. A nice collection of letters from two conservative leaders. 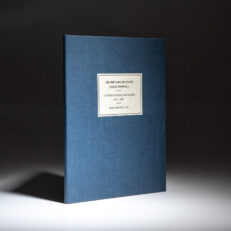 You're viewing: Letters to William Safire from Secretary of State Colin Powell $625.00
Add to cart