The first cookbook of New Orleans. This is the first edition of The Creole Cookery Book, edited by the Christian Woman’s Exchange of New Orleans in 1885.

The Christian Woman’s Exchange of New Orleans, which was founded in 1881, began compiling a cookbook of New Orleans recipes, with the proceeds to benefit the “needy women” of the city. During the project, they adopted the term Creole cooking, a phrase that was commonly used to describe the Creoles of Louisiana, but never a type of cuisine. The book was published in 1885 and marketed to visitors to the World’s Industrial and Cotton Centennial Exposition. A second book published in 1885, a few months after The Creole Cookery Book, was titled La Cuisine Creole by Lafcadio Hearn. Together, these two volumes form the foundation of Creole cookbooks in Louisiana. 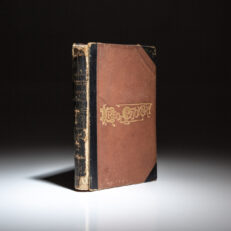