Large folio, 348pp. Full mottled brown steerhide, gilt-lettered title on cover. Rubbing to edges, some fraying of leather at spine and along bottom edge. Silk end papers, gilt top edge. Multiple color advertisements throughout. Signed on limitation page by President Franklin Roosevelt, below watercolor portrait of White House, with tissue cover. This is number 2120 of 2500 signed copies. A unique copy with no recipient on the front cover.

This book was published by the Democratic National Committee to raise funds for the party. It was sold for $250, which marked the first time a sitting President had actively helped raise funds for a political party. It created a minor scandal at the time, with Republicans attempting to exploit it to their political advantage during the 1936 election. (Halter T-119) According to Halter, it was likely printed in 1937 and mailed to supporters who contributed. 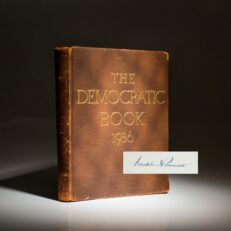