This book was published by the Democratic National Committee to raise funds for the party. It was sold for $250, which marked the first time a sitting president had actively helped raise funds for a political party. It created a minor scandal at the time, with Republicans attempting to exploit it to their political advantage during the 1936 election. (Halter T-119) According to Halter, it was likely printed in 1937 and mailed to supporters who contributed. 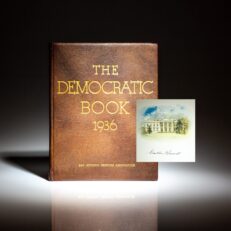