The Law Dictionary: Explaining The Rise, Progress, and Present State, Of The English Law – Comprising Copious Information on the Subjects of Law, Trade, And Government

From the personal library of President James Buchanan, The Law Dictionary, signed by Buchanan on the title page. Octavo, [ii], 553pp. Full period calf, title in gilt on spine over red morocco label. Statement on title page that this is the First American Edition, from the Second London Edition. Spine repaired at ends, reinforced hinges. Some age toning, with foxing on endpapers. This is Volume V, from a complete set of 6 volumes. Signed by President James Buchanan on the title page.

Comments: This law book is from the personal library of President James Buchanan. His library was primarily held at his home in Lancaster, PA, called Wheatland. The majority of his presidential papers, correspondence and books went to Dickinson college, his alma mater. After graduating with honors in 1809, James Buchanan moved to Lancaster and became a legal apprentice to James Hopkins. He was admitted to the Pennsylvania Bar in 1812. Buchanan would go on to serve in the House of Representatives from 1821-1831, United States Senator (1834-1845), then as the 17th Secretary of State under President James K. Polk. He was elected President of the United States in 1856, serving one term. He predicted in retirement that “history would vindicate my memory,” but his inability to stop the succession of the southern states has sealed his legacy as one of the least successful presidents in history. 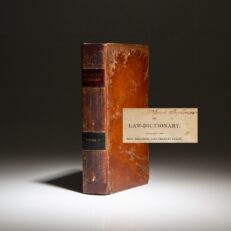 You're viewing: The Law Dictionary: Explaining The Rise, Progress, and Present State, Of The English Law – Comprising Copious Information on the Subjects of Law, Trade, And Government $2,800.00
Add to cart