The Life And Letters Of Captain John Brown

First edition of The Life and Letters of Captain John Brown, the American abolitionist leader, published posthumously in 1861.

John Brown (1800-1859) was an American abolitionist leader, who was executed for his incitement of a slave rebellion at Harpers Ferry. He was a strong advocate of the need for violence to end the American institution of slavery, since decades of peaceful opposition had failed. Brown was tried for treason against the Commonwealth of Virginia and became the first person executed for treason in the United States. His legacy is honored by some as a heroic martyr, while others have condemned his use of violence. The editor of this work, Richard D. Webb, was an Irish publisher and noted abolitionist, assisting in the publication of this book and The Narrative of the Life of Frederick Douglass. 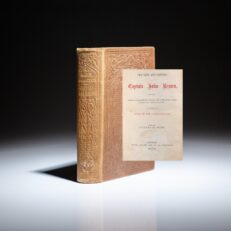 You're viewing: The Life And Letters Of Captain John Brown $3,200.00
Add to cart