The Life Of Admiral Viscount Exmouth

From the library of Rear Admiral Samuel Francis Du Pont, The Life of Admiral Viscount Exmouth by Edward Osler.

Octavo, xii, 287pp. Contemporary three quarter calf, marbled boards, title in gilt on spine. Marbled endpapers with bookplate of S.F. Du Pont on front endpaper. Complete with frontispiece of Exmouth, a plate displaying a medal presented to Exmouth after the Battle of Algiers and a folding “Plan of Sea Defences at Algiers” lithographed by “N. Currier. No.1 Wall St. N.Y.” Currier opened his Wall Street office in 1835 and shortly after moved to 2 Spruce Street. This early lithograph is of such scarcity that it is not recorded in Conningham’s Currier & Ives Prints: An Illustrated Check List (New York, 1949). Some toning to title page, frontispiece and endpapers, clean text throughout. (Sabin 57797) An exceptional association copy.

Rear Admiral Samuel Francis Du Pont was a member of the prominent Du Pont family. He served in the Mexican-American War, capturing the city of San Diego. After the war he became commandant of the Philadelphia Naval Shipyard, and he studied the possibilities of steam power in ships. In 1861, he was given command of the South Atlantic Blockading Squadron, the largest fleet ever commanded by a Naval Officer up to that time. His ill advised and unsuccessful attack on Fort Sumter in April, 1863 lost him the confidence of Secretary of the Navy, Gideon Welles, and Du Pont was relieved of command. He returned to Delaware and died in 1865. Du Pont Circle in Washington, DC was named in his honor. 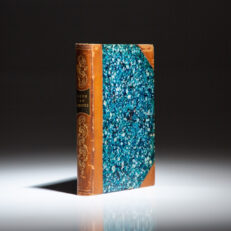 You're viewing: The Life Of Admiral Viscount Exmouth $850.00
Add to cart