Signed copy of The Malaise Speech, delivered from the Oval Office on July 15th, 1979, published by the White House.

Octavo, [14pp]. White paper boards, bound at spine with staples. Presidential seal and publication date of July 30, 1979 on front cover. A fine example, free of any marks or notations. This copy is signed on the front cover by President Jimmy Carter, with a full signature. A unique signed piece, from a pivotal moment in the Carter Administration.

I want to talk to you right now about a fundamental threat to American democracy… I do not refer to the outward strength of America, a nation that is at peace tonight everywhere in the world, with unmatched economic power and military might. The threat is nearly invisible in ordinary ways. It is a crisis of confidence. It is a crisis that strikes at the very heart and soul and spirit of our national will. We can see this crisis in the growing doubt about the meaning of our own lives and in the loss of a unity of purpose for our nation… In 1979, as the national energy crisis continued, President Carter met with industry leaders to overhaul the administration’s energy policies, which were outlined in this speech. While the public response was generally positive, the media declared it the “malaise speech,” which stuck in the national conscience. The energy policies enacted by President Carter resulted in a 10% decrease in per capita energy consumption and a 50% decline in oil imports, all-important economic drivers in the 1980s. 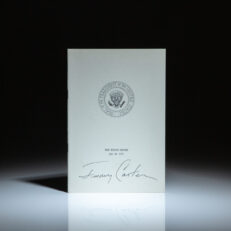