Letter from former President Jimmy Carter to the Social Security Administrator of Cordele, Georgia, asking him to stop harassing his employee. This employee, Curtis Jackson, is featured in two of President Carter’s books.

The letter is dated February 2nd, 1987. Framed and double matted, next to a color photograph of President Jimmy Carter. Measures 20″ x 14″. The letter reads: “To Administrator, Cordele, It seems to us that you are harassing Curtis Jackson. He has one leg (a permanent condition), does good work within his capability, and we are careful not to violate SS regulations in employing him. Call me personally if you have further questions – Jimmy Carter.”

Curtis Jackson was a longtime employee of the Carter family in Plains, Georgia. He began working on the farm of Rosalynn Carter’s grandfather, where he was a day laborer. After a sawmill accident, he was limited in the work he could do and was hired by President Carter to do work around the house. He is featured in two of President Carter’s books, most notably as the subject of “Best Christmas of All?” in Christmas in Plains. In this short chapter, Carter recalls how he visited the Jackson home and was shocked at his living conditions. In 1991, in conjunction with Habitat for Humanity, President Carter spent his Christmas vacation building a house for Mr. Jackson, which was completed on Christmas Eve. When President Carter found out a few years later that a predator mortgage lender had convinced Jackson to sign a new mortgage in exchange for $1,500 in cash, he called the lender directly. To avoid the negative publicity, the lender made a donation to Jackson and canceled the mortgage. The story within the Habitat for Humanity circle drew attention to predatory mortgage tactics, long before the financial crisis of 2008. 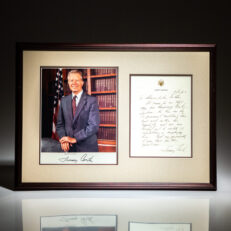 You're viewing: Letter Defending An Injured Employee $2,200.00
Add to cart