Complete six-volume set of The Memoirs of Harold Macmillan, signed by the former prime minister on the title page of Volume I and Volume II.

Volume I and Volume II are signed by Prime Minister Macmillan on the title page. A nice collection.

Comments: Harold Macmillan served as the British Prime Minister from 1957-1963. A protégé of Prime Minister Winston Churchill, Macmillan served as the Foreign Secretary and Chancellor of the Exchequer under Churchill’s successor, Anthony Eden. Upon Eden’s resignation, Macmillan succeeded him as the Leader of the Conservative Party and Prime Minister. During his tenure, he rebuilt the “Special Relationship” with the United States that had been damaged by the Suez Crisis. In retirement, Macmillan published a six-volume autobiography, which included: Winds of Change 1914-1939, The Blast of War 1939-1945, Tides of Fortune 1945-1955, Riding the Storm 1956-1959, Pointing the Way 1959-1961 and At the End of the Day 1991-1963. His final publication, War Diaries: Politics and War in the Mediterranean, January 1943-May 1945 was a commercial success. Upon his death in 1986, he was the longest-lived prime minister in British history. 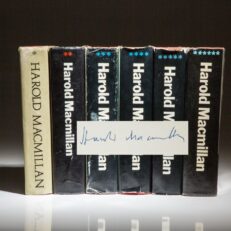