Deluxe limited edition of The Autobiography of John Major, signed by the author on the limitation page.

This book is part of a series of signed limited editions from Harper Collins Publishers of London, in deluxe blue leather binding. The other books from this series are from Prime Minister Margaret Thatcher and include: Downing Street Years, The Path to Power and Collected Speeches. 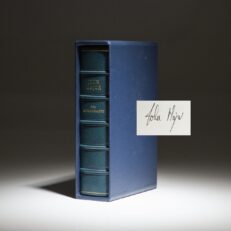