The Nominating Of A President

Limited edition of The Nominating Of A President by Paul Laxalt, signed by Senator Laxalt on the half title. Octavo, 45pp, [3]. Red cloth, title in gilt on spine and front cover. Red endpapers. Frontispiece portrait of Senator Paul Laxalt. In publishers red cloth slipcase. Designed and printed by Herb Yellin. Produced by the Lord John Press. From a limited edition of 200 copies and 50 deluxe copies. This is a “Presentation copy,” as noted on the limitation page and signed by Senator Paul Laxalt on the half title.

Comments: Paul D. Laxalt served as the United States senator and governor of Nevada. He ran for president in 1988, but quickly lost to George H.W. Bush. Laxalt was a lifelong supporter of President Ronald Reagan, known by many as the “first friend” of Reagan. He served as Reagan’s campaign chairman in 1976 and 1980. After Reagan’s election, Laxalt served as the chairman of the Republican National Committee. He passed away in 2018. 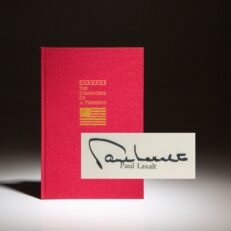 You're viewing: The Nominating Of A President $375.00
Add to cart